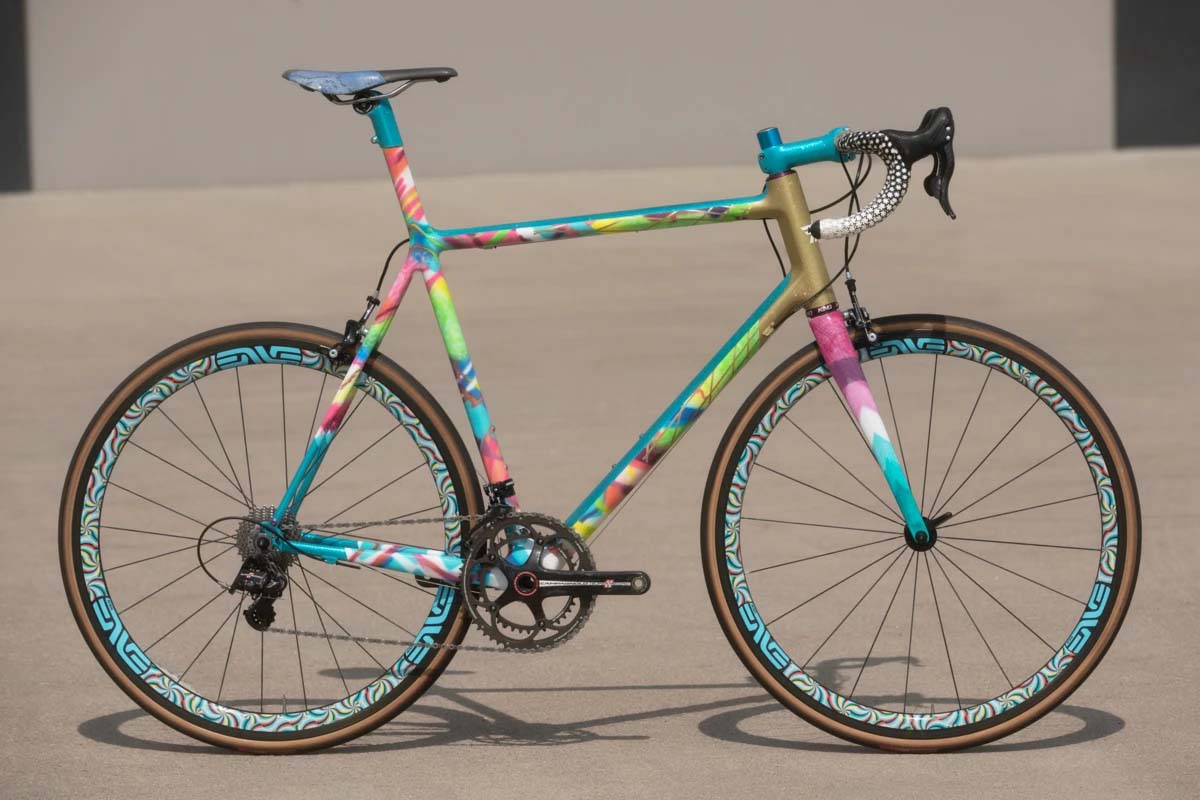 Ah, 2015. It was a simpler time. A time when a “magical-rainbow-laser-unicorn-tropical-island-melting-clocks-brilliant-light-bouncing-off-of-the-floors-hyper-everything bike” custom Manual For Speed Argonaut made the rounds on the internet along with a slightly less in-your-face Speedvagen. Fast forward to 2021 and that technicolor MFS masterpiece is up for sale—as a Certified Pre-Owned bike from The Pro’s Closet. 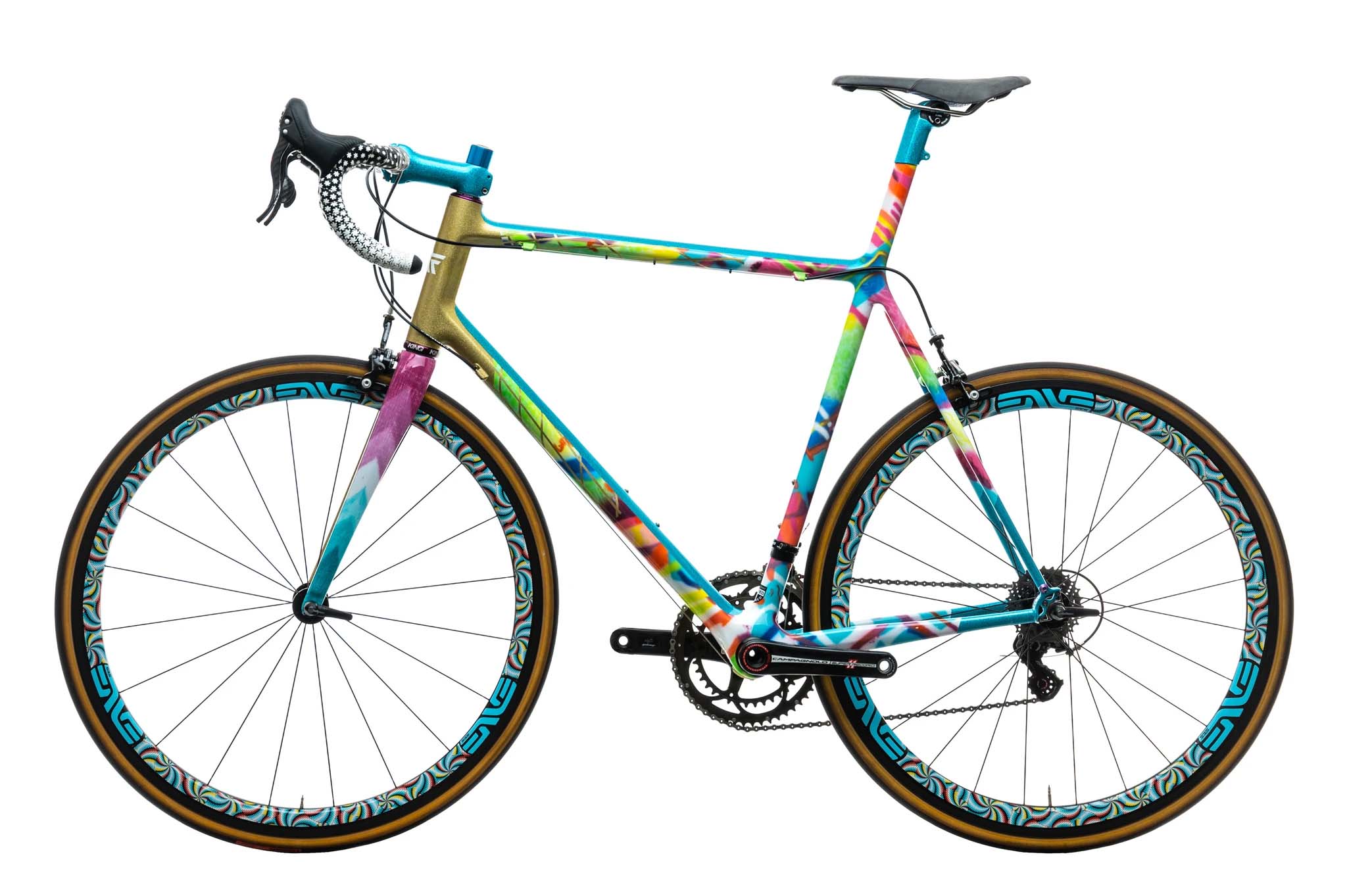 You can be sure that you’ll never see someone riding the same bike as you if you purchase this wild Argonaut. Priced at $8,999.99, it’s expensive, but it’s also a custom Argonaut with no lead time. The large bike features a Campagnolo Super Record 11 speed group with a custom painted ENVE SES 3.4 carbon wheelset and ENVE carbon stem and seatmast cap, and weighs in at 15lbs 1oz. 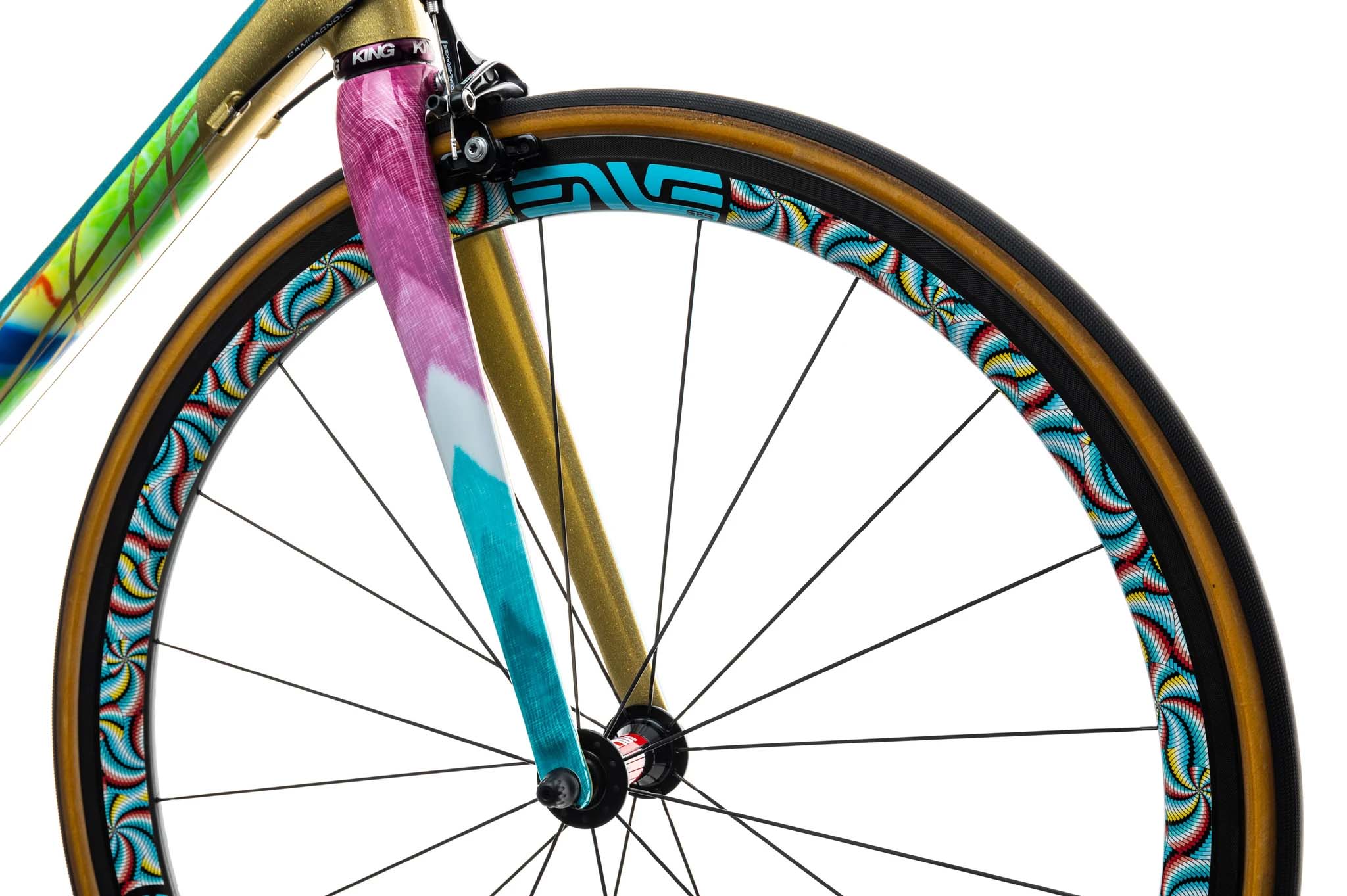 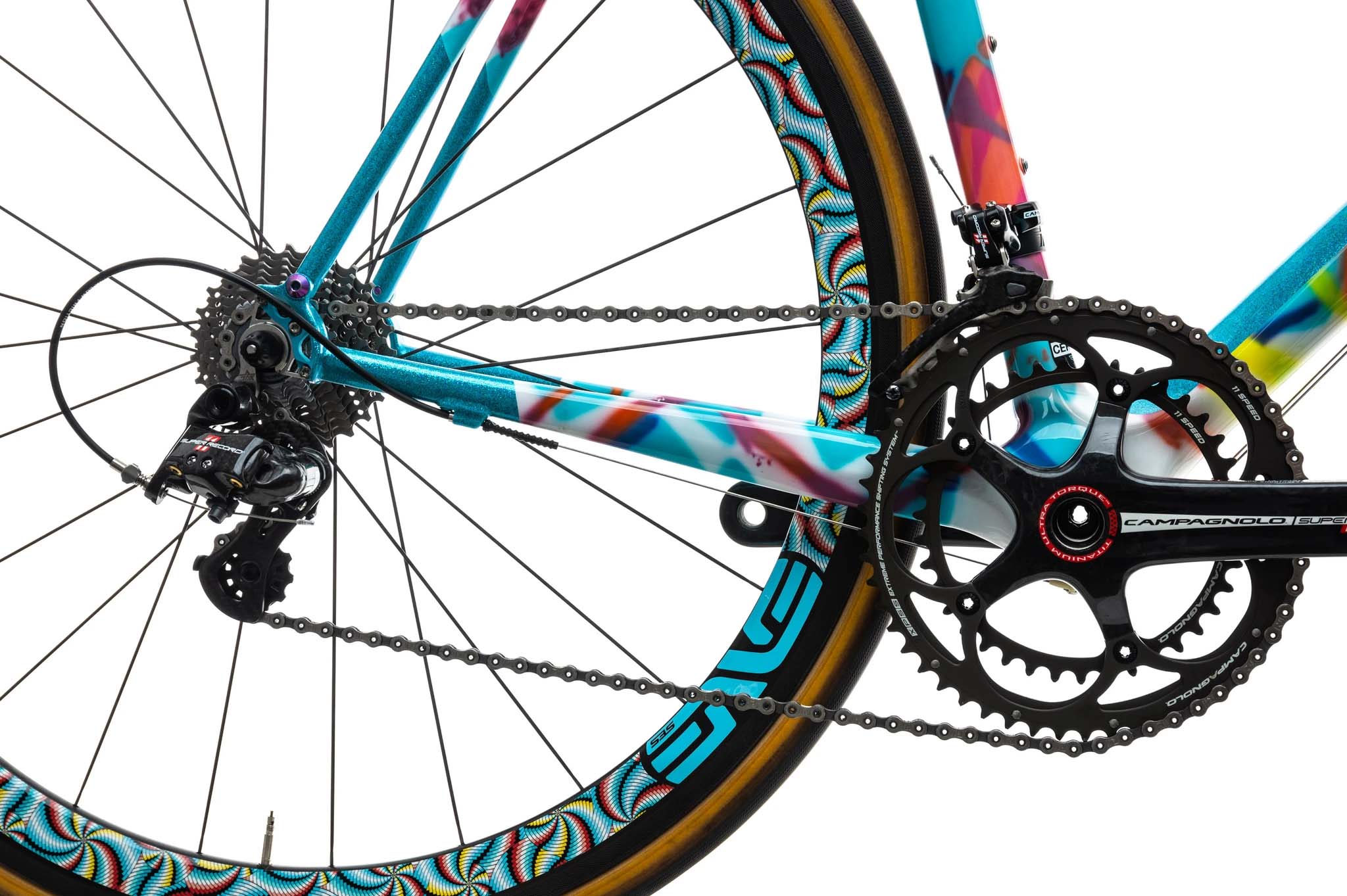 If owning a bike that was all over the internet is on your bucket list, this may be your best chance. Assuming you are the first one to snatch it up. 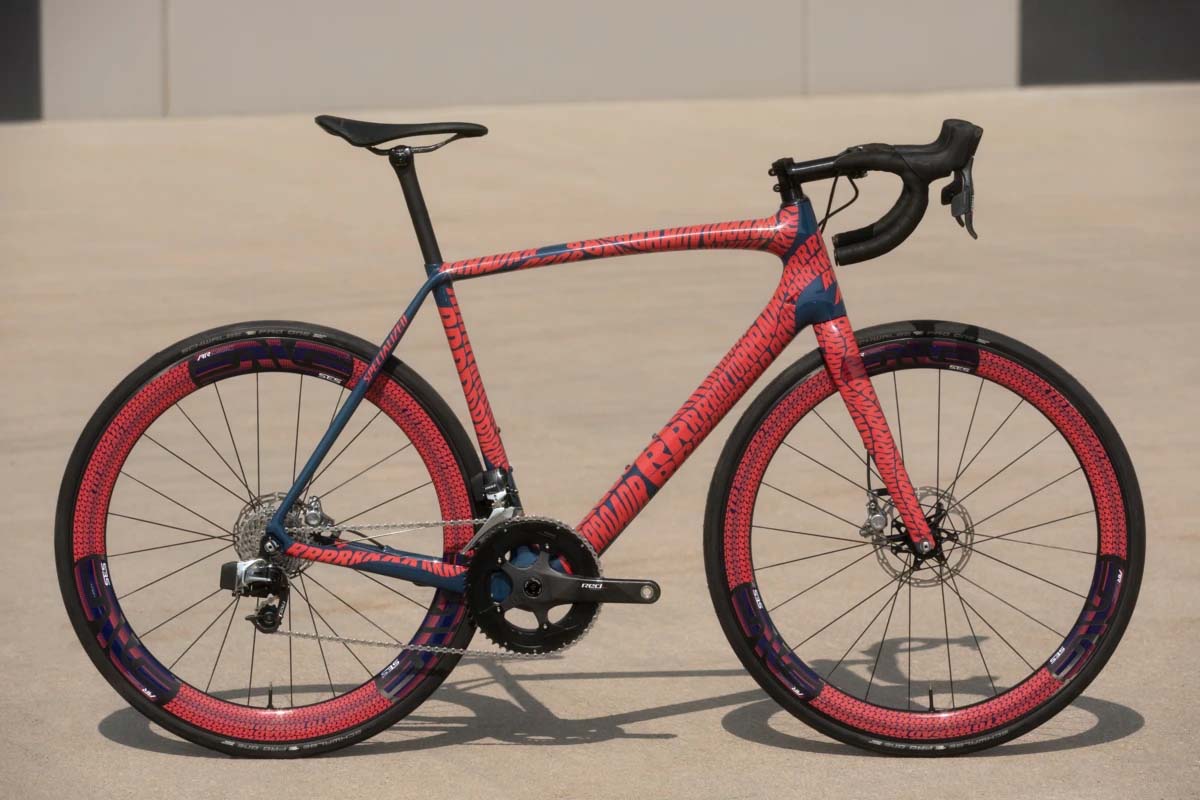 Want something a bit more, uh, monochromatic? This Road to Rad Specialized Tarmac might fit the bill.

“In 2016 we launched Road To Rad; a project to save the future of cycling one super inclusive group ride at a time. The Tarmac, raced once or twice, ridden to the top of a very tall hill somewhere in Taiwan, then, just like that, forgotten, doomed to a dusty pointless life in the back of a temperature-controlled basement. Then, in the summer of 2021, overwhelmed by guilt and a systemic lack of resources, I decided to release this cultural artifact and Cat 3/Knife Fight winning machine into gen pop. Now you can personally own a piece of race-ready museum-quality Road To Rad.” — Daniel Paisley, MFS. 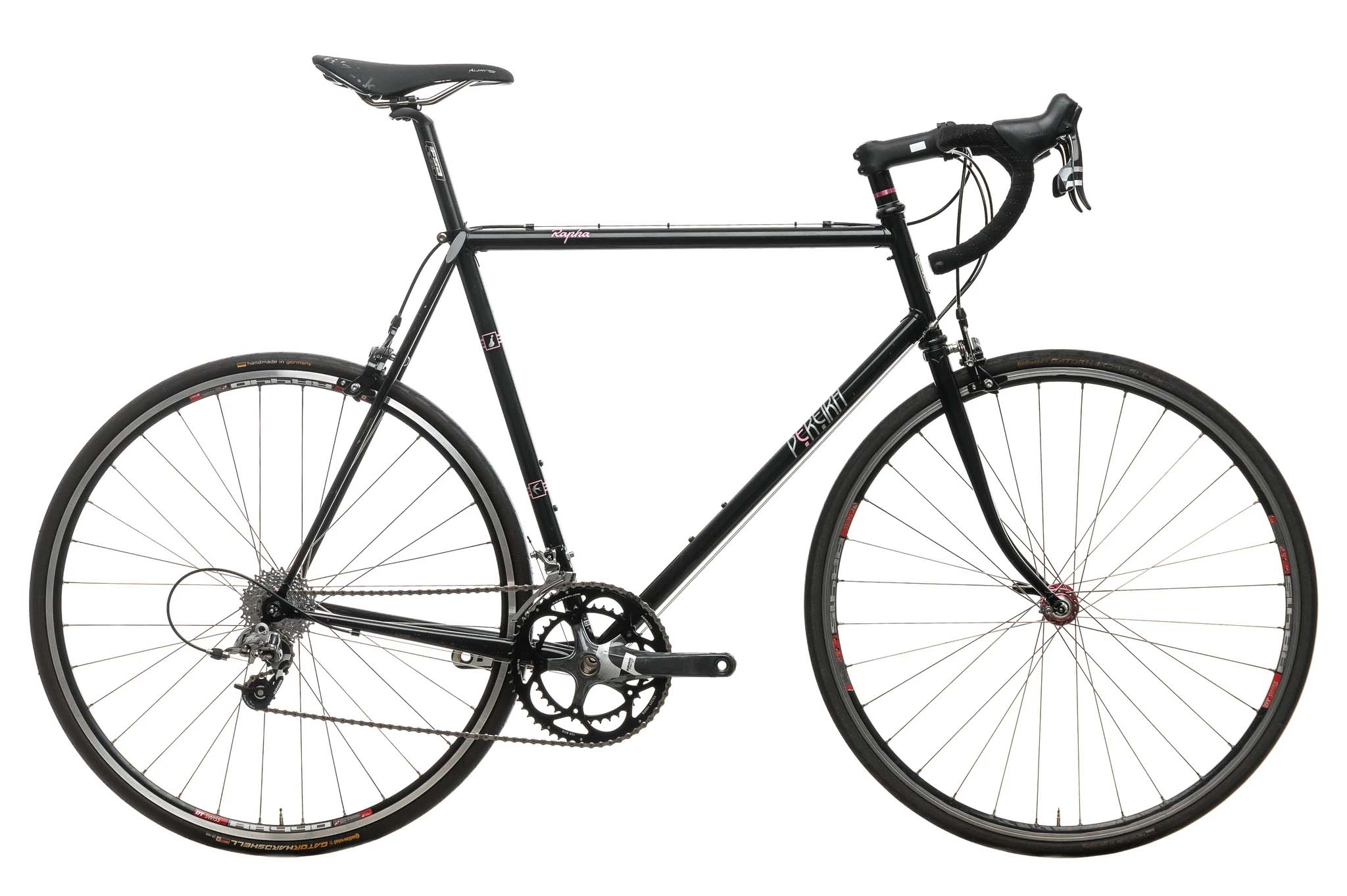 Finally, if you want something a bit more classic but still with a MFS twist, this Rapha “Continental” Breadwinner is also up on the block.

“People are always calling me the Grandfather of Gravel. They’re like dude, Daniel, you literally invented gravel riding and the gravel category which has been for over 10 years now the hottest, biggest, most epic trend in cycling since basically the wheel. And I’m like whoa whoa whoa sure, yeah, I mean, I guess I did give birth to the Rapha Continental from my brain in 2009 which does predate basically everything including Instagram and legit tire clearance. And as part of that project, we did collaborate with a bunch of handmade bicycle builders to build us a bunch of almost-proper shred sleds so that we could do things like ride through a mile of hub-deep Mississippi overflow and cross over knee-deep snow banks on unnamed gravel roads in the Wind Rivers at sunset on the way to a hot spring. Which, I suppose, ipso facto, does mean that I invented gravel. Obvs I’d never say that but … Anyway, gravel fans, you’re welcome.” — Daniel Paisley, MFS.

The oldest bike of the bunch, this 2011 Breadwinner Continental Custom Rapha Edition Road bike is an X-Large and is priced at $3,999.99.

All of the Certified Pre-Owned bikes from the Pro’s Closet get a full pro-tune by their master mechanics and include a 141-Point inspection, 30-day satisfaction guarantee with hassle-free returns, and their RideFast Shipping which should have you ready to ride in 15 minutes or less.