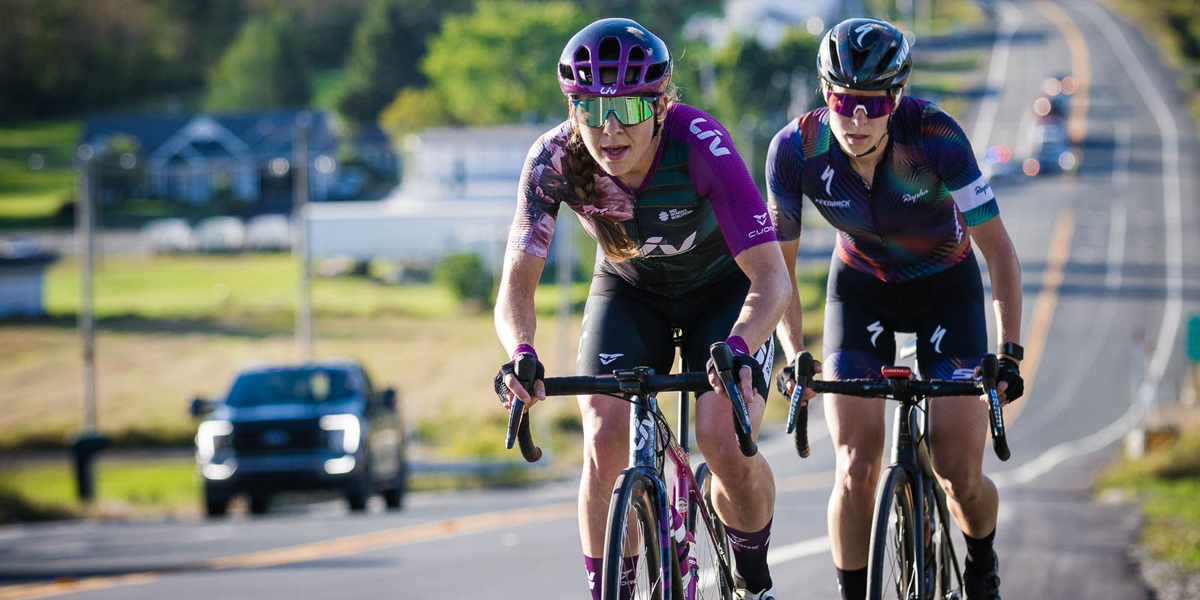 The Canadian Road Championships concluded on Sunday after three days of racing with the road events for para-cycling, Junior men and Elite women’s categories. Alison Jackson (Liv Racing) repeated as the Elite women’s champion after winning the time trial on Friday, confirming she is one of Canada’s top road athletes and a force to be reckoned with on the world stage.

The Elite women faced the same hilly course as the men yesterday, with the added difficulty of harsh winds which took its toll on the riders. The 114.6-kilometer race started off strong, with 14 athletes breaking away from the main pack in the first 10 kilometers. The pack thinned out as the race progressed and eventually only Jackson and two-time Pan American cyclo-cross champion Maghalie Rochette (Specialized Racing) were left to battle it out at the front. Jackson attacked with 35 kilometers to go to take the win in front of Rochette and Sara Poidevin (Rally Cycling). The main field finished seven minutes later, Ruby West sprinting to take the win in the U23 category, followed by Laury Milette (Macogep Tornatech Girondins de Bordeaux) and Florence Normand (Macogep Tornatech Girondins de Bordeaux). 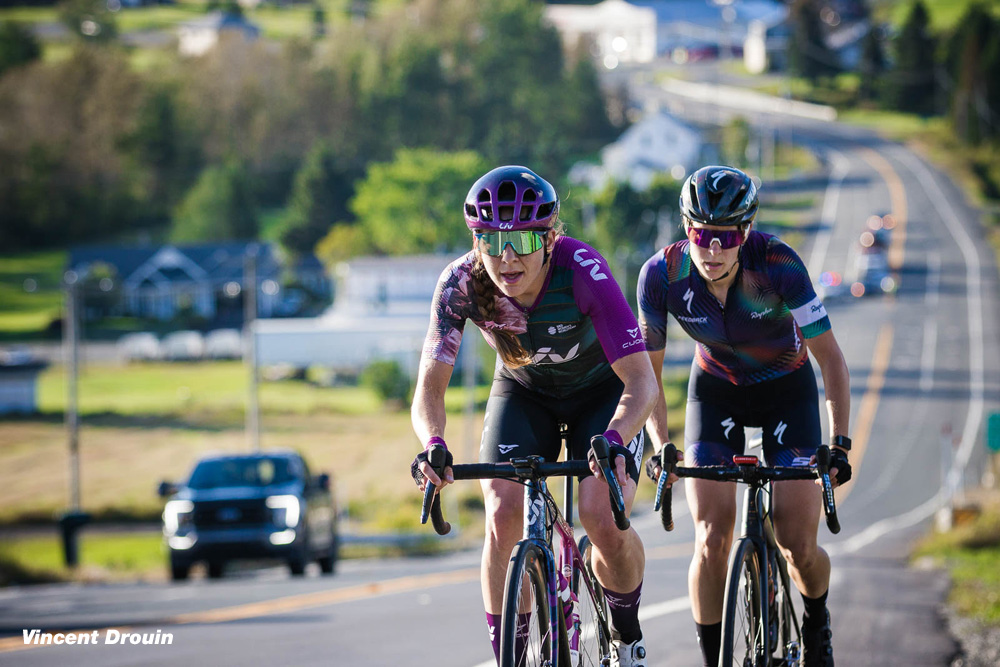 Alison Jackson and Maghalie Rochette at the front of the race

“My experience racing in Europe and the Belgium classics, I really knew how to race in the wind and that really played to my advantage,” said Jackson. “I took to the front pretty early on to help make it more of a selection and I picked my moment and went all in all the way to the end. I think I was more nervous this weekend than I’ve been for any other race so I’m really happy to come out with the double win.”

The 54 Junior riders completed the same distance as the women and faced similar conditions, with strong crosswinds affecting the race pace. Canadian time trial champion Léonard Peloquin (Équipe du Québec) attacked at the 45-kilometer mark and rode solo for over 20 kilometers before being joined by teammate Jérôme Gauthier and Clovis Roy (ZVP Opto-Réseau). Peloquin eventually dropped both riders and managed to create a solid gap with the main peloton in the last 30 kilometers, finishing 1:30 ahead of Charles Duquette (Équipe du Québec) and Luke Hubner (Cycling BC). 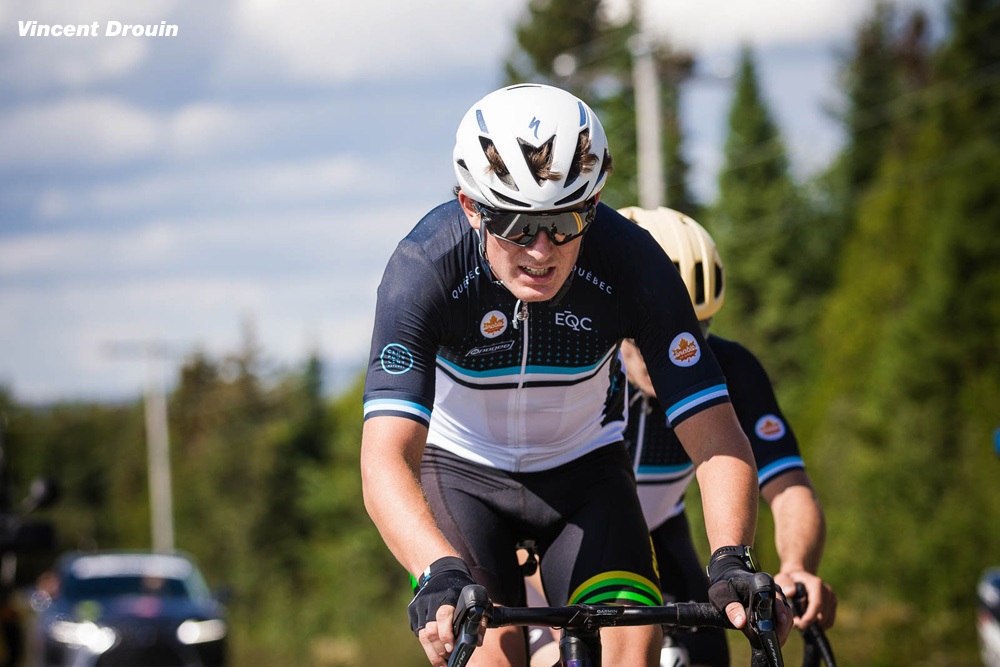 “It was really hard,” said Gauthier. “I had a teammate in the breakaway very early on in the race so I bridged the gap to help him; he didn’t have the legs to go with me so I just went as hard as I could. Our strategy was to control the race, stay in the front and win at the end and that’s what we did.”

In the para-cycling categories, Marie-Claude Molnar, Louis-Albert Corriveau Jolin & the duo of Lowell Taylor & Ed Veal repeated as Canadian champions after finishing first in the time trial races on Friday. The event also saw new athletes on the podium, including newcomers Alexandre Hayward and Thuy Do, who were competing at their first Nationals. 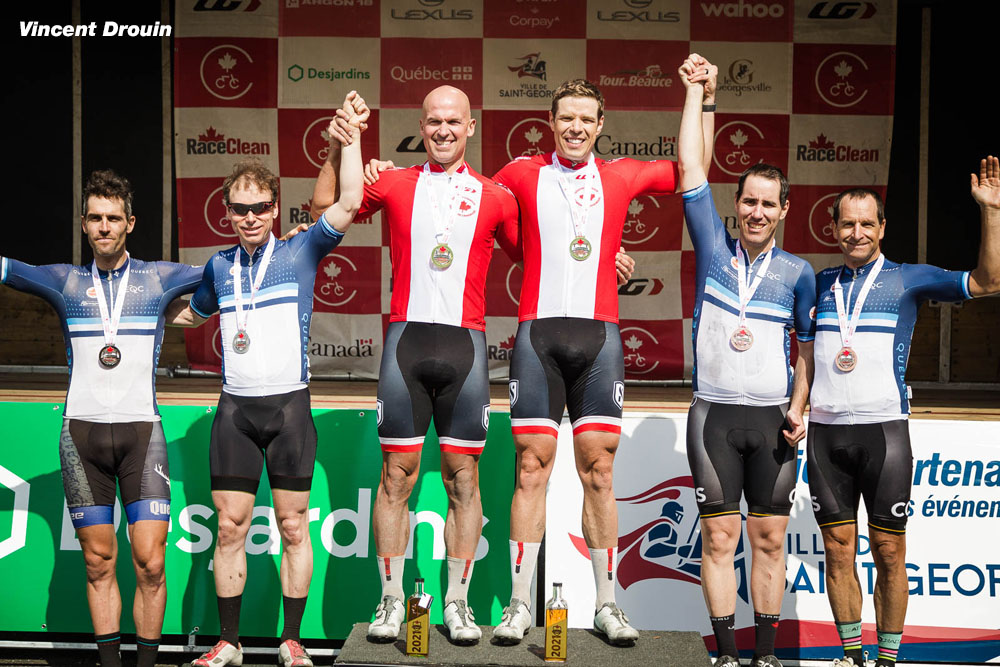 “Today was a battle of wills going up and down a hill repeat,” said Taylor. “Team Quebec had three tandems chasing us down but every time they attacked, we shut it down. We knew we had the legs and I’m so proud to race alongside Ed Veal. I came into the sport older, a little bit later and I’ve been aiming to get to the top of the podium at Nationals. It feels so amazing to come home with the jerseys, the medals and the maple syrup.”

Full results for all competitions can be found here. The Canadian championship series now head to Baie-Saint-Paul for the Canadian Mountain Bike XCO Championships from September 24-26.