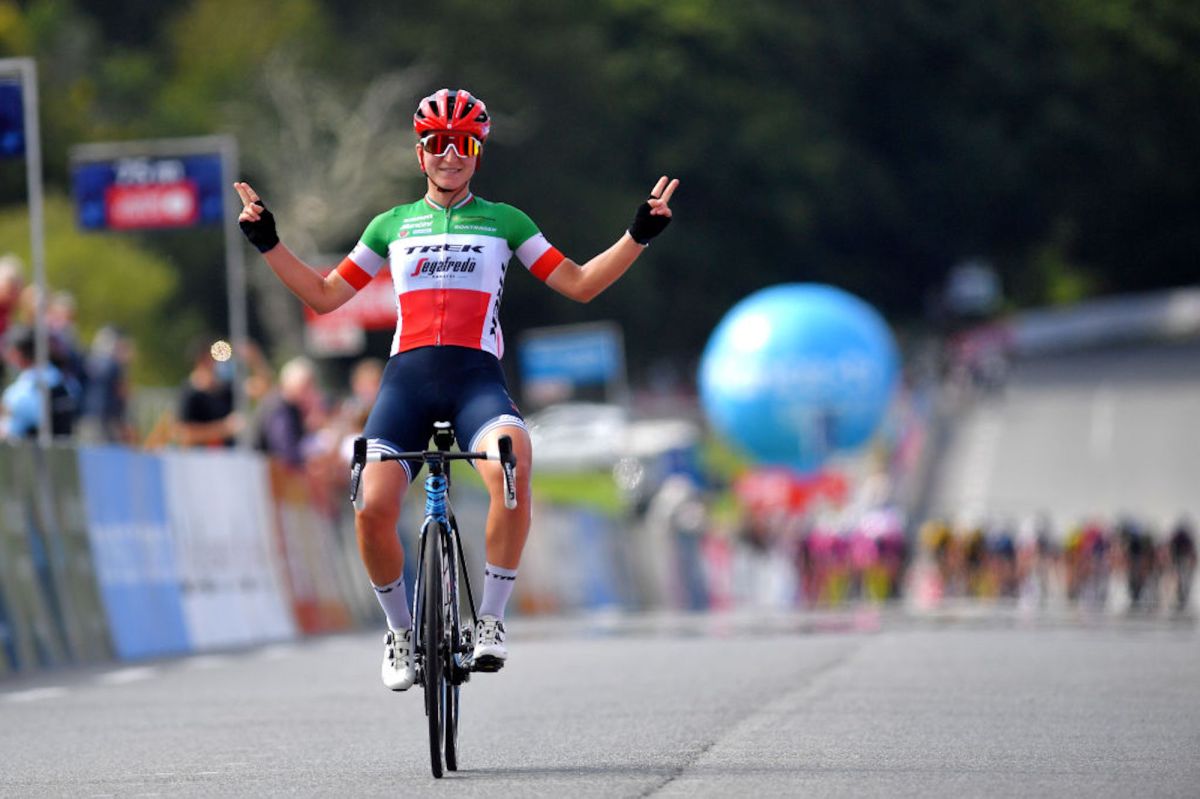 Italian champion Elisa Longo Borghini took the win at the end of an enthralling edition of GP Plouay on Monday. The Trek-Segafredo rider had been hugely active throughout the race, making the wining move 12km out on the course’s steepest slopes.

With a reduced peloton struggling to bring her back she managed to stay clear, winning by a handful of seconds from Gladys Verhulst (Arkéa) in second with the in-form Kristen Faulkner (Tibco-Silicon Valley Bank) third at the head of a group of around 20.

The final 40km presented a fabulously entertaining spectacle, though the final lap was especially so. With 12km remaining, Longo Borghini bridged with two other women to a solo Tatiana Guderzo (Alé-BTC Ljubljana) who had attacked at the start of the final 13.6km circuit.

After a similar move on the previous lap, Longo Borghini just continued the move dropping the others and building a gap that never exceeded 40 seconds. A series of other riders set off in pursuit, but none were able to bridge and the 29 year-old won alone.

Not only is the victory a second consecutive one for Trek-Segafredo after Lizzie Deignan won last year, it is sweet revenge for the Italian who lost out on the 2020 European title on the same course to Annemiek van Vleuten (Movistar).

The race was also notable to Verhulst’s result, a career best for the fast improving 24 year-old French woman, and of course the continued progression of American Faulkner, who took a first WorldTour win in Norway two weeks ago.

In its 20th edition, the GP Plouay may be tough to travel to but it is a coveted race among the peloton, with some big names having taken the honours in Brittany. Of those there have been three British women, Nicole Cooke, Emma Pooley and Lizzie Deignan who was in France to win her fourth edition, and extend her record as the woman with the most victories.

The route has been changed in recent years, with the signature final ascent at Ty Marec removed last year after the race became predictable, though still exciting. It has been replaced by the Pont Neuf climb, which tops out two kilometres from the line, much closer than its predecessor adding a different dynamic.

Another change is that the race is now run entirely on one 13.68km circuit, 11 laps making for a lumpy, relentless and challenging 150.48km.

Despite that the bunch stayed together until close the end of the fifth lap, when the pace suddenly lifted and the bunch exploded, a group of six women emerging at the top of the Pont Neuf climb.

Winner in 2019, world champion Anna van der Breggen was in that group which was before two more women escaped, Alena Amialiusik (Canyon-SRAM) and Jade Wiel (FDJ-Nouvelle Aquitaine Futuroscope) getting a lead.

By the time they crossed the line next time around, with 68km remaining the pair led by 1-20 on a peloton apparently happy to let them go. Van der Breggen later came to the front on one of the circuit’s three climbs, stretching rather than breaking the group, apparently to no purpose other than to warm up.

With the rainbow jersey back in the bunch, Wiel and Amialiusik extended their lead to more than three minutes as they closed in on the final 50km.

However, just as Amialiusik dropped Wiel another group were off the front of the bunch, including the British duo of Anna Shackley (SDWorx) and Abi Smith (Tibco-Silicon Valley Bank), which made some inroads on the leaders, but such a large group was allowed too much space and they were caught.

Amialiusik forged on alone while behind the peloton had been whittled down, Trek-Segafredo particularly active in the peloton, sending Ruth Winder to the front after she had been part of the large escape.

One reason for the American squad’s enthusiasm was that Van der Breggen was part of a small group off the back, though the Dutchwoman soon chased back on and the group swelled to around 40 women with 32km to go.

With two laps remaining Amialiusik was beginning to come back, Trek-Segafredo joined by DSM to bring the gap to one into minute, before Elisa Longo Borghini Trek-Segafredo) made huge move on the circuit’s first climb, instantly getting a gap.

The Italian champion was soon joined by her Spanish counterpart, Mavi Garcia (Alé-BTC Ljubljana) and the pair caught Amialiusik, though DSM and SDWorx were doing the work in the bunch to bring what was now three leaders back.

An attack on the penultimate ascent of Pont Neuf saw DSM’s German, Liane Lippert bridge to the leaders, though they were soon joined by others, forming a group of 12 with one lap to go.

One of those though was not happy with the status quo, former world champion Tatiana Guderzo Alé-BTC Ljubljana attacking, with Longo Borghini, Erica Magnaldi (Ceratizit-WNT) hot on her heels.

But the race refused to settle and Longo Borghini attacking again, leaving the three chasers looking to each other as the race finally entered its closing 10km. The three chasers caught, more tried their luck, and while Floortje Mackaij (DSM) coming closest none could reach the rampaging Italian.